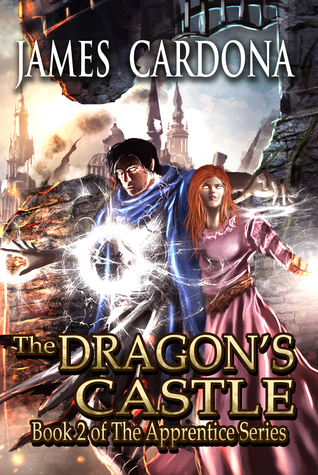 A fresh and engaging take on the making of a wizard, this second book in the Apprentice Series by prolific and award-winning fantasy, science fiction, YA and spirituality writer James Cardona shows his fantasy and YA background.

Bel, a new graduate of Lasaat, the elite school for wizards, now serves as apprentice to forest archmage Nes’egrinon. Before he can even recover from wounds suffered in the quest to win his mage staff, Bel and his master must answer an urgent summons and rush to the capital to help King Thrashel save his throne and his realm. Bel and Nes’egrinon are soon plunged into a cascade of challenges: succession battles, wizardly corruption, multiple hostile armies and the much-reviled foreign avian wizards, not to mention mighty creatures bent on humanity’s destruction. Bel must also face his own greatest personal challenge, his love for Shireen, the woman he can never have if he is to achieve his full potential as a wizard.

Written for a young adult audience, this second book in multiple-award-winning author James Cardona’s Apprentice Series covers familiar ground—the training of a wizard—in fresh and engaging ways. Older and more mature than Harry Potter and his friends at Hogwarts, Bel and Shireen must together grapple with the terrible trade-off at the heart of their quest to become wizards, the requirement that they abandon all hopes of love and marriage, even as their love rekindles and grows ever deeper and more passionate. More earnest, dutiful and altruistic than the edgy, cool, pot-smoking, alcohol-guzzling magician college students of Lev Grossman’s “The Magicians” series, Bel and Shireen must make life-changing decisions while learning their wizardly powers, dodging various enemies and watching their elders grapple with the consequences of their own youthful decisions. Less formidably confident than Mother of Dragons Khaleesi from G.R.R. Martin’s “The Game of Thrones” series, these young apprentices are approachable, fallible and engaging heroes, their interactions with each other and their masters leavened with a gentle humor as they struggle, fail and rise to try again and make wise decisions without half the knowledge and wisdom they need.

Uniquely wonderful is the author’s ability to take the reader into the minds of the young apprentices as they struggle to learn their craft, whether it be sensing the forest and the life force of all the creatures it contains, sending oneself out into the world or peering into another’s mind. Even more thrilling are the moments when the reader gets to experience the same skills now masterfully exercised through the viewpoint of their experienced masters at the fullest extent of their powers. Author Cardona exercises a rich and vivid imagination, taking the reader on an exciting, well-paced and always surprising journey through a complex and concrete world. Whether it be political maneuvering, pitched battles, magical fights or courtly marriage ceremonies, Cardona tells his tale in memorable detail.

I admire the complexity and depth Cardona brings to this young adult tale and the respect he has for his readers. He does not insult his young readers with over-simplification and a dumbed-down vocabulary. Relish with me “the fetor of death,” for example. Or the speech of the Tundric officers, with their echoes of the poems of the Icelandic Viking sagas like “game of iron” or “swords covered in the dew of men’s blood.” His political setting of warring realms under outside threat carries echoes of the warring but inter-related Anglo-Saxon realms on the eve of the Viking invasions that eventually unified England. He explores the ancient and persistent trade-off between a spiritual vocation and an ordinary layman’s life through both his young apprentices, standing on the precipice of their decisions, and through the lives of their old masters, who have had to live with their decisions. While his heroes are moral and generous, they are also prey to selfish urges, lapses into cowardice and thoughtlessness. In short, they are very human and real. And oh! He does marvelous things with the great creatures awakened in his story.

Definitely a worthwhile and engaging read, but a few problems bear mentioning. Typographical slips and jarring word choices and repetitions occasionally marred my experience of this magical adventure. Language choices veered from courtly formality (“My good king!”) to contemporary informality (“you know,” “neurotic kook”). I was unsure whether these were attempts at humor or just sloppy style. I hate sounding pedantic about such details when the story, world and characters are so well imagined and engaging, but I believe it hurts the cause of indie publishing when self-published authors release work that does not meet traditional professional editing standards.

In spite of my gripes about these small flaws, I would strongly recommend this series to young fantasy fans for its unique and memorable spin on the path of the wizard and the vividly imagined experience of being a wizard.