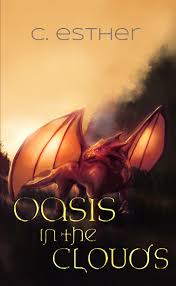 Dragons and a Complex and Nuanced Tale of Frenemies

Disclosure: I received this book in exchange for a fair and honest review.

When I finish a book, I close my eyes for a moment and ask myself, “What stands out? What do I first think of or feel having met this story and these characters and this world?” In the case of YA fantasy author C. Esther’s “Oasis in the Clouds,” the first book in her “When Worlds Collide” series, the answer came fast and strong.

Esther portrays for her readers the most fully realized dragons I’ve ever had the privilege of meeting in literature, with distinct personalities and a well-developed role and history in the world. Close on the heels of the several dragons Esther introduces to readers would be her gift for showing us the reality, a moment-by-moment gritty reality, of riding those dragons, and learning to control one’s magical powers and other joyful duties of being a fantasy heroine. Thanks to Esther, I now know what it is to ride a dragon, to see magic particles take shape and learn how to shape them myself. For this, I thank her with my whole heart, for she has gloriously captured the essence of fantasy in making these experiences so real for readers.

The story itself is a classic fantasy journey quest, of an heir who must recover her birthright and claim the destiny intended for her. Various skills must be discovered and mastered, allies befriended, enemies sought and overcome, and the world restored to its rightful order. All very well and good, and having read and forgotten more stories of this type than I can now remember, I can attest that this part of the journey is straightforward and solidly done if predictable enough.

More unexpected and special, though, is the unique relationship between heroine and villain in this story. Using the devices of the need to recover stolen memories from the villain, and the heroine’s inborn ability to retrieve selected memories of her forebears, the story is structured to give us an uncommonly deep understanding of the villain and the villain’s motivations, an understanding made richer by the friendship the two once shared. I often had an odd but distinct sense that the author’s personal experience may be closer to that of the villain than of the pampered princess heroine Niri, for Wicca Melody’s anguish over her terrible choices was so sympathetically and believably portrayed and the reasons, twisted though they may be, behind her choices deeply rooted in the villain’s own vividly portrayed personal suffering. Out of sympathy for the Wicca Melody, I found myself rooting for some kind of rapprochement between Niri and her former friend, knowing all the while that in the realpolitik of a proper fantasy world, where villains must be overcome, my hope was a foolish and vain one. Major kudos for creating a sympathetic villain along with a likable enough heroine and a complex and nuanced relationship between the two frenemies.

I also found myself thinking long and hard about the ending. I don’t want to write a review with spoilers, so I’ll have to speak around things a bit. The predictable punishment of the villain at the end of such a fantasy story occurred, yes, but in a fresh and, I must say, somewhat disturbing way. I found myself pondering how I felt about the heroine after she executed such a punishment on her rival. Without sharing where I came down on the matter, I will say the author’s decision on this matter was neither obvious nor expected, and certainly falls in far more interesting and morally ambiguous territory than one usually finds in more typical black and white YA fantasy. As for the outcome for the heroine at the end of this book’s quest, I have both hands clapped over my mouth lest I spill any beans regarding the wholly unexpected and magnificent choice the author made for Crown Princess Niri. Well done, brava!

The book itself is obviously lovingly written and carefully edited, although the honest part of the review compels mention of a few nits on writing style and craft. While punctuation and spelling are otherwise flawless throughout, the writer or editor occasionally mangles homonyms (taught/taut, phased/fazed) or tosses in modern business memo jargon, e.g. “process the information.” The nit that caused this grumpy old curmudgeon the most distress was the use of “Crowned Princess” in place of “Crown Princess.” As citizen of a loud democratic republic that long ago overthrew our monarchical chains, perhaps I am mistaken in believing “Crown Princess” to be the correct term for an heir to the throne whose royal parents are still alive and ruling, for if she were crowned, then she would be Queen Regnant and no longer Royal Princess. But these are the difficulties of a pedant and not those of most readers.

On more of a style and personal preference side, I found the writing style to tend toward over-explaining at times, whether on dialogue tags, emotions or facts that we already knew or could easily guess. Perhaps that extra attention to explaining the whys and wherefores of a story is necessary in fantasy for young readers, but the tendency occasionally slowed the flow and pacing of the story for this reader. However, I forgot all my complaints every time the dragons took flight or Niri learned a new skill, so in the grand scheme of things these nits are unimportant and will not harm the reading experience for most readers.

Recommendation: wholeheartedly recommended for young readers of fantasy, especially those who have longed to meet a dragon. I can still taste the wind blowing in my face as my dragon dives and I desperately hang on lest I fall. Thank you to the author for sharing this experience with me.