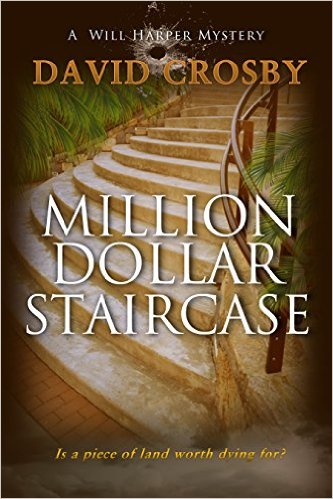 Author:  David Crosby. Mr. Crosby is an award-winning photo-journalist making his novelist debut with this book, first in his Will Harper mystery series.

Former journalist Will Harper struck it lucky when Aunt Dotty kicked the bucket and left him enough to kiss his job goodbye and buy a boat. Then his luck runs even hotter when the attractive French-speaking owner of the run-down marina where he parks his boat gets romantic. But they’ve got trouble with a capital “T” because evil developers want the city fathers to wield the weapon of eminent domain to bulldoze her marina and put up a million dollar staircase, ADA-compliant, of course, in the middle of their new development. With the help of a hotshot lawyer who owes him a favor and armed with his journalistic sleuthing skills, fearless and generous Will swings into action to help his new lady friend.

First, the fun. It’s a sun-drenched Florida coastal setting, with ramshackle bait shacks, live aboard boats, lazy boozy meals, flowered shirts, greedy developers, corrupt local politicians and scary tattooed “muscle.” My apologies for bringing current events into a review, but I write this review in the heat of the 2016 presidential campaign, where it’s the Donald and his eminent domain wielded against little old ladies so he can build a casino parking lot vs. Bernie fighting for the revolution of the little guy against Big Money. Mr. Crosby has written a timely book, and built a fictional world around a real and current issue. He’s definitely fighting for the little guy, or in this case, the lovely Sandy of the French accent who is in danger of losing her marina to the evil developers. The author demonstrates a good grasp of the legalities of eminent domain and the strategies of evil developers and does a solid job of helping the reader understand them as well. He also knows his way around journalism and boats.

Somewhat confusingly, the book is marketed as a mystery. It is not a mystery, or at least it is not mysterious. The villains are introduced straight off as villains, rather selfish and ham-handed villains in fact, and the only mystery is how and when they will receive their come-uppance for being so villainous and dastardly. “Million Dollar Staircase” is not so much a mystery as it is the introductory pilot for what looks to be a private detective series built around the dashing, justice-minded, generous, brave, gentlemanly, independently affluent and conveniently skilled Will Harper. Think of it as an extended character sketch with some fun action sequences as the bad guys are foiled and brought low.

I like Will, although I question his judgment at times…in ways I cannot detail without spilling plot beans. He makes some very strange decisions. Let’s just say I found myself chanting “Call the police!! Call the police!!” several times. I guess hard-boiled detectives-to-be don’t instinctively do that when confronted by awkward corpses. He’s a nice guy, a gentleman, smooth enough with the ladies and treats them well, which is also appealing, but he lacks a certain cluefulness about the fair and mysterious sex. I liked him enough to want to pull him aside a couple of times and just tell him, “Dude, she’s just not that into you…” His difficulties with love form a kind of subplot as a backdrop to all the legal proceedings and action sequences.

Mr. Crosby is a good storyteller, although I’m not sure he’s demonstrated his mystery chops with this book. (Need more…mystery.) I would also quibble with his dialogue style, which is naturalistic to the point of being too real—greetings and small talk–and not as effective as it could be in showing character and pushing the plot along. Minor typos and formatting issues distracted slightly. He’s a great world-builder. I could feel the Florida mugginess and taste the seafood. I enjoyed his little guys and gals vs. the Big Bad Money Boys plot. His characters are colorful and memorable enough if not particularly complex. The story is conveyed with a warm, earnest upbeat feel, gliding calmly over the occasional murders and kidnappings and difficulties in romance with a gentle humor.

Mystery fans looking for a new series should check out Will Harper, perfectly positioned at the end of Book 1 to start solving crimes and mysteries, although Mr. Crosby’s ability to create mystery and tension remains, in this first pilot book, as yet unproven.