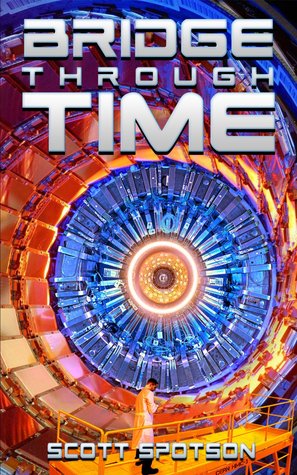 A campy romp through space, time and family by Canadian fantasy and YA novelist Scott Spotson.

In this sequel to YA and fantasy author Spotson’s science fiction debut (“Life II”), the eldest son born in the “wrong” time stream to time traveler Max Thorning must set things right and restore the universe to its rightful order.

Burdened with an excessively high IQ and severe ADHD, along with frequent night terrors and a nagging sense he doesn’t belong “here,” Kyle Thorning nonetheless overcomes his father’s depression, his parents’ divorce and his personal limitations to become a world-famous PhD in physics and land a position at CERN, the famous particle physics lab in Switzerland. He even scores a hot physicist girlfriend and seems poised for success and happiness. But events beyond his control have been growing alongside his stellar career, namely the stealthy global takeover of the entire planet by four-legged, four-armed, multi-colored aliens called the “Darsians.” One things leads to another, and eventually Kyle realizes the magnitude of the destruction his father Max Thorning caused by going back in time and creating a second time stream, one overrun by Darsians slowly tightening their grip on his planet by addicting humanity to super strong cidda coffee and enthralling them with integram virtual lives. Can Kyle save humanity–and his father’s life–by finding the means to go back in time and set things right before it’s too late?

Buckle up for a campy ride. Spotson’s writing is fast-paced and clear, well-formatted and cleanly copy-edited. The story starts a bit slow, giving needed space to catching up readers who may have missed the first book, but shifts into a trot by mid-book and gallops to an exciting finish by the end. Spotson “helicopter parents” his verbs with generous doses of adverbs for extra oomph, quite never trusting them to carry the weight of the action unaccompanied. Characters, male and female, spend a good deal of time with tears rolling down their faces, drawn in cartoon-y over-the-top ways, melodramatically nervous, terrified, enraged, grieving or otherwise discombobulated much of the time. I wondered if I had wandered into a middle-grade story, with all the exaggerated emotion and adverbs, but the occasional bouts of romance (committed relationship, discreet, “off screen”), the moments of parental worry about the impact of divorce on children and the physics duel at CERN tugged me back up into a YA-to-adult targeting. To be clear, his writing style drove me nuts, but I found myself unable to put the story down. I had to find out whether Kyle succeeded or failed, and how it all went down. And if that isn’t the definition of engaging, dear reader, I do not know what is.

On what to rate this time travel tale, I am honestly flummoxed. I have to assume the adverb-and-hysterical characters thing is a consciously chosen style, since the world-building is intelligent, the story-telling robust, the copy-editing excellent, and the occasional bursts of physics quite fun. You have to give the man extra points for coming up with not one but two separate ways to travel through time, after all, while working neutralinos, anti-Higgs bosons, Casimir effects and slit experiments gone rogue into the story. I happen to have a minor in physics, and his physics are nonsensical hand waving, but exuberantly delivered with Trumpian compelling effect. The aliens, while central to the plot and eventually revealed in all their glorious villainy, seem almost an afterthought in this family-centric tale of a son’s quest to save his father and the universe. Five seems too high for a book with this many adverbs, histrionic characters and weeping spells; three stars too low for something this well copy-edited and exuberantly over-the-top campy fun. I can see the B-movie version, shot for a skinny budget, of this noble tale of courage and sacrifice in the war against the aliens. Four stars, recommended for precocious children with ADHD who like physics and time travel stories and for adults looking to discover the next campy cult favorite.