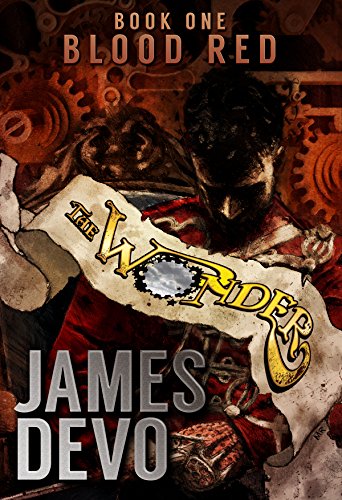 Madness and Mayhem: a droll and entertaining start to a steampunk fantasy series

James Devo’s debut steampunk fantasy “Blood Red” is a meticulous marvel of madness. I loved it. I’ll tell you why, of course, for this is a review, not a fan girl rant, but it’s the sort of fun, fantastic, quirky read one could work up a good fan girl rant about. I received a free review copy of this book in exchange for an honest review, and I am so very lucky that I did.

I like steampunk, I like fantasy and I like clever British humo[u]r. So, yes, I admit I was pre-disposed to enjoy this book for genre reasons, for it delivered all three in spades.

The steampunk was lightly done, found mostly in the vaguely Victorian/Edwardian speech and costumes of the characters, settings and the use of steampunk mechanical devices to overcome magical devices. The fantasy was yes, I must use the word, fantastic. Devo developed an intricate and yet stunningly simple magic system, of green, red and blue Wonder, magical substances manipulated by hyperphysicists, of course. For bonus points he developed a fantasy world with layers of backstory and varied settings discovered in pleasing droplets as our heroes and villains pursued their various and often nefarious ends. I finished the book a few days ago, and yet beautiful and terrifying visuals still linger in my brain, from hordes of onrushing Humps, masked Immolators, a Cathedral somehow leaning down and then springing back up, a crystalized world, and a fine library where cognac and fine port are served to gentlemen and pushy adventurous ladies on luxurious leather chairs. I wish I could forget Mandrell’s final state, but alas, he haunts me still.

Best of all was Devo’s humor and skill at sketching characters. Within these pages, look forward to lots of droll character development, very British, dry and funny as hell, from the unfortunate aristocrat Mandrell to the equally/less/more unfortunate warrior Tork, depending on how permanent you prefer your death. Let us not overlook the relentless and insatiable Laurel, the noble and tragic Hilt and all the others of this double ensemble crazy cast of characters. I cannot pretend I was able to keep straight all the characters, but as a rough guide for readers, there’s a bunch of good-ish guys and gals and a second bunch of bad-ish guys and gals, and both groups, with occasional team-switching and double-crossing, are in competitive pursuit of this book’s McGuffin, a Gargoyle key, which is eventually obtained and then in the second half of the book, put to use to reach somewhere previously unreachable, with momentous outcomes in the balance.

I loved the voice and writing. It was just right for the genre, mood and pace of this story, with little bon-bons of delicious humor embedded in what could have been the most prosaic and dull of moments. Devo somehow managed to maintain a rather frenetic feel in the pacing as we rush from battle to siege to oasis to battles anew while still slowing down for bite-sized morsels of back story and character sketching and relationship development that are the delight of this book. The story was rather fractal in nature, if I can use the word that way, in that the big over-arching plot was there, writ large (“Find the key. Use the key. Enjoy the consequences”) but along the way we had many mini-plots and mini-situations unspooling and allowing for more humor, depth and complexity. Don’t for a moment trust the author’s summary guide to characters and terms at the end of the book. It is half-truths, lies and exaggerations, mostly serving as a lame excuse for more humor. Watch the chapter headings carefully, to remind yourself where and when you are, for it can get overwhelming and you could easily get lost without a map and timepiece. That way you will not miss the freeway turnoff to the sad tale of Maisy, one of these fractal side-tales that, I kid you not, brought me to tears at the noble sacrifices made. It was an echo of every great soldierly sacrifice made on behalf of hapless civilians, up to and including Aragorn riding out against the horde when the keep has fallen to give the civilians time to escape.

On craft and presentation, I liked the layout and found the book quite well edited and clean. I am usually quite harsh about typos, and oddly enough the author seems to have misplaced some periods here and there, but spells perfectly and, other than the missing periods, punctuates well. The Humps must have made off with the missing periods, or the Trade stole them to swap for blue Wonder.

Recommendation: Ordinarily I would knock off a star for such craft sins, but I genuinely enjoyed the ride so much I could not bring myself to do it, as my personal enjoyment level was a six on a five point scale. Five stars, for wit, humor, world-building, pacing, wordsmithing, superb and memorable characters and a series I plan to read in full as a paying customer. Highly recommended for fantasy and steampunk fans looking for a new series, as well as anyone fond of British humor. Not recommended for stiffs who take everything too seriously, as they will find it appalling. Not for young and innocent readers, although I believe they would greatly enjoy the originality, creativity, creatures and humor of this world, as children enjoy William Goldman’s “The Princess Bride” although it was written for adults. Perhaps parents could read aloud to their children and edit Mandrell’s difficulties on the fly to something more family-friendly.