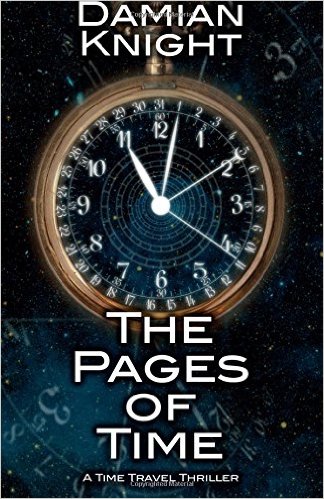 Kudos to author Damian Knight for imagining a novel and creative time travel mechanism and using his invention to stir up a nasty brew of terrorism, coercion and ambition whipped up by villainous foes who can only be defeated by a brave sixteen-year-old boy. In this debut novel, Damian Knight slyly sets us down in mundane family drama, slowly turns up the heat to scorch us with family tragedy and then ratchets up the pace and the stakes when he eventually deposits us on the run in a thriller world of gun-brandishing spies and counter spies with national consequences in the balance.

“The Pages of Time” is a high concept story, deriving its power and engagement from the clever mechanism Mr. Knight has imagined for enabling time travel. Like all good magic, this mechanism has costs and limitations. Even when mastered, its powers are not enough to allow our young hero Sam to escape a terrible, soul-charring choice. The ending is spectacular, worth the ride and only visible a page or two before it explodes in the reader’s face. While the story is a standalone, Mr. Knight has set up an industrial-grade titanium hook into a great sequel or series.

The book is smoothly written and scrupulously well-edited, aside from a few rather Germanic capitalization choices here and there which perhaps obey British rules foreign to this American reader. I did not like the writing, smooth and perfectly copy-edited though it was. A screenplay of the same story, plot and characters would be a fast-paced delight, vividly highlighting Mr. Knight’s intricate plotting, memorable visuals and thriller genre black-and-white villains while moving the story along to its brilliant finish. The screenplay version by its very format, conventions and constraints would burn away the distractions and digressions that mar an otherwise good story. Take a blow torch to most of the side character descriptions, most of the domestic drama, most of the “hello, how are you?” chit chat, most of the backstory digressions, most description of mundane moments like the decisions of what tea biscuits to eat or the full read of flight captain’s take-off speech, and the camera would show us clearly and easily where we are in space and time, leaving only a spare and fast-paced imaginative and innovative exploration of time travel and its consequences set in a high stakes thriller world.

On the page as written as a novel, a reader can easily struggle with jumps between heads and time locations. “Is this the young version of that character?” “Are we in present time or the past?” Upon a careful re-reading, to make sure I understood, I saw that Mr. Knight in fact diligently marked these transitions with reminder clues, but his pathfinding breadcrumbs were often obscured by extraneous detail or side dramas or random conversations that did not keep reader focus pinned firmly on the core drama of his story, a teenager’s battle to save his family from the terrible destruction visited upon them by using his powerful–but in the end tightly limited–time travel ability.

My peevish quibbles aside, “The Pages of Time” is a solid addition to the time travel bookshelf, and Mr. Knight exhibits in this first book a great natural gift with plotting, world-building and sheer imaginative scale as well as disciplined care in the editing and presentation required to deliver a quality book. I look forward to his next book in the series.
* * * *
I was given a free copy of this book in exchange for an honest and unbiased review.