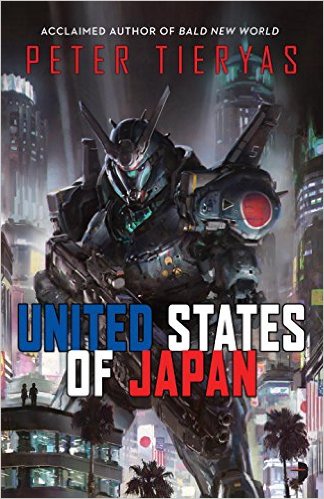 Author: Peter Tieryas. This is Mr. Tieryas’s third novel, and is hotly anticipated by much of the science fiction press.

Summary: Beniko Ishimura is a man with a tainted heritage, a tangle of conflicting loyalties to navigate and dangerous colleagues and companions. He’s a game censor in a dystopian totalitarian regime, charged with hunting down dissidents who reveal their disloyal behaviors and tendencies through their gameplay choices. Playing the part of a ladies man and a bit of a slacker, falling far behind in the promotions race, he needs to decide who he can trust and who he must fight in a shadowy world of secret police, yakuza and loyalty enforcers.

Set in a mind-bending version of the 1980s in Southern California, Beniko’s adventure navigates a world in which the Axis won World War II and divided the United States between them, with the Japanese ruling the West Coast and the Nazis the Eastern United States. Beniko’s parents were liberated from a Japanese internment camp only when the Emperor dropped a nuclear weapon on San Jose, wiping it from the map. Flashing forward to Beniko’s timeframe…When a subversive video game positing that the United States of American actually won the war starts appearing everywhere, he teams up with a single-minded Imperial agent to find and stamp out the source of the dissident game. Their journey takes them into the dark underbelly of the Japanese regime, revealing dangerous truths they must confront about their government, each other and themselves.

Review: I came to this book with high expectations, excited about the author, the high concept plot about an alternate history in which Japan won the war, the video game angle and the bold comparison to a favorite Philip K. Dick novel, The Man in the High Castle. (Note: I read United States of Japan two months before publication in ARC form, headed by a prominent note that final editing and formatting had not taken place. While there were a few distracting typos and formatting glitches in the version I read, the strengths and weaknesses of this work are clear enough in the current version that I will ignore editing details in this review on the assumption they will be cleaned up before final publication.)

Tieryas tells a tale of ambitious scope and scale and creates a vividly imaginative high tech world of porticals (super smart phones), mecha robots, viral weapons and insanely sadistic torture instruments. Never mind that video games were just crawling out of the primordial ooze of Pong and mobile phones were still the size of workboots in the real late 1980s. If the Japanese had in fact won the war, I am certain they would have gotten on with developing these gadgets much faster. Without revealing details, let us just stipulate that the author has a vivid imagination for technology, setting and cruelty. I will never look at ants the same way again.

Tieryas is a visual writer, big-screen ready, who takes the reader to each clearly delineated scene in memorable fashion, whether it be the seamy cyber-yakuza gangster hangout, the antiseptic torture chamber, the huge shiny shopping and gaming arcade or the super-sized mecha battleground. He’s also a solid story-teller, developing complex and well-motivated characters who pursue their agendas believably enough in the elaborately imagined world he has created. Even his smaller side characters have complete backstories and unique goals, all of which adds texture and color to his richly detailed world. He mixes a punk-colored, neon-lit Japanese social scene set in appropriately modern gender-equal host and hostess bars with details of Southern California settings twisted inside out, like an upmarket Compton, and Catalina Island, a sunswept destination for pleasure boats in our world, converted into a labor and torture camp in his dark vision.

It’s probably politically incorrect to notice such things in 2016, but I also admire Tieryas’s development of his female characters. Akiko, an intensely loyal and single-minded Imperial agent, charged with enforcing internal discipline and rooting out the disloyal, is a fully realized character with subtle and shifting motivations and goals. While she possesses, of course, all the overachiever fighter skills and gender-transcending attitude and courage of the modern Lara Croftian female superhero, she also has a rich inner life and very much plays out her own agenda rather than being a mere foil for Beniko. The early-discarded girlfriend, the red-headed/blonde/constantly shifting babe-alicious Tiffany is also interesting and intelligent with her own busy and complex existence and goals, even if her main early function appears to be cheerful sexpot companion. Without revealing details of her evolution, she turns out to be so much more. It’s a pleasure to find this level of development lavished on female characters in what one might expect to be a pretty male-dominated flat character robot gamer world. In fact, Beniko, the slacker and ladies man, comes off as somewhat underdeveloped and passive in the first half of the book, partly in comparison to the active and dynamic Akiko and Tiffany. Akiko more than holds her own as an equal protagonist throughout the story without ever lapsing into the trope of the love interest, an admirable choice.

I find much to recommend in United States of Japan: the high concept plot, richly detailed tech world, complex characters and a certain gritty, dark atmosphere that permeates every page. Tieryas also drives a fast pace, moving swiftly from action to discovery and forward, always forward, with dialogue alternating with his vivid visuals to keep the action moving.

However, I am forced to admit I did not enjoy the book as much as I had hoped. Aside from the minor distractions of the editing and formatting lapses, which I am ignoring, I found his writing style fell somewhere between annoying to downright distressing, jarring me out of immersion in his terrific world and hurling me into a state approaching rage at times. Great storyteller, lousy wordsmith. While 95%–no, 98%!– of his prose is straightforward, muscular, action-oriented and clean, nothing fancy but not bad, perfectly suited to his fast-paced storytelling and chosen genre, every now and then he reached for a literary flourish that drove me nuts, and not in a good way.

“Akiko was in a store that sold memories, [cool, I like this, wonder where you are going, but I’m in for the ride] a mishmash of tawdry emancipation bottled into faked vulnerability and fingernails from forgotten musicians grilled on kebabs of misplaced desire. [Huh? Lemme read that again…kebabs, really? Never mind, I’ll keep going…] If only she’d had better taste, she could have escaped the corpulence of discontent. [wha—? Okay, so it must be a typo thing. Keep going.] But no, her belly swelled [did I miss a mating scene somewhere?] and her finger nails turned into claws as her nose gushed latex paint.”

Hrm. I am left befuddled and speechless.

This sort of passage is a frozen fish smacked across the reader’s face in the midst of an otherwise thrilling ride. To be fair, it was a dream sequence. But still. It happened far too many times, and not just in dream sequences. He has a few other style tics, merely annoying and not rage inducing, like occasional oddball word choices that are not quite wrong but are fairly weird, lapses into passive voice, or occasions when he starts off a sentence with one subject, and sticks in a clause with an unrelated subject at the end. Distracting but not deadly. But the occasional patches of purple prose, the abstract metaphors and the use of $500 words where $5 words would do must go, or readers will rise up like the Americans and revolt.

The other main difficulty I experienced as a reader, beyond suffering from the occasional bouts of purple prose, was feeling alienated from Beniko and Akiko. I found myself struggling to stay connected to them or care what happened to them for much of the first half of the book because, let’s face it, these were tough people doing a tough job in a dark and dystopian world, and that sort of thing takes its toll. They cannot be Disney princesses cavorting with cute bunnies while bluebirds sing overhead. But it took me to 50% through the book before I had a spontaneous experience of caring for Akiko and feeling empathy for her position and fully 60% through before I had the same experience for Beniko.

By the end, Tieryas had won me over for both characters, and I do not want to spoil the experience for readers by explaining why, but I fear many readers will not persist far enough to reach the payoff. I would encourage readers to persist, but the purple prose problem, while minor in the grand scheme of things, exacerbates the character alienation problem because the readers begin to mistrust the author’s character decisions partly BECAUSE the prose is so annoying.

In the author’s defense, I note it is probably worth trusting an author who takes such care with names and fusses in the early chapters with the details of names. Beniko’s mother Ruth, which means “compassion, or empathy with the suffering,” and his father Ezekiel, named for the Old Testament prophet who foresaw both the fall and the redemption of Israel did not, could not have, accidentally given their one and only son a girl’s name without reason, a name that can mean “red child” or “child of goodness” if you continue the cultural mashup and use the Latin meaning of bene and the Japanese meaning of “child” for ko. These are all very strange names for Japanese Nissei; they were not chosen randomly by the author.

My struggle with this issue of alienation from the major characters leads me to one final observation. As I said above, I did not enjoy reading this book. This tale is dismal, distressing and paints an unrelieved portrait of the hypocrisy, the violence, the fear, the self-doubt, the mistrust and unending stress of living under a totalitarian regime.

My lack of enjoyment points not to a fault in the book, but rather to its strength AS a portrait of life under a totalitarian regime. My distress was the distress of the characters forced to live in such a dark world. The author created in me the reader the experience of living in his bleak world. His marketing people want to claim the mantle of spiritual successor to Philip K. Dick because of a superficial resemblance to another tale set in an alternate history where Japan has conquered the U.S. West Coast.

Fair enough, and probably one that will sell books, but I believe the more relevant comparison is to George Orwell’s 1984. I also disliked the experience of reading 1984 but have found it lingers in my memory and my thoughts long after my visceral recoil from the reading experience has faded. So too, I suspect, will United States of Japan linger with readers, for Tieryas has done his historical homework. Under the glitz and eye-candy of the grand mecha fights and cool gangster sets is a powerful portrait of life under the all-seeing eyes of the secret police in wartime Japan. His characters are not particularly Japanese, and his regime is not particularly Japanese, but his depiction of life under a totalitarian regime rings true, frighteningly true, and this truth, in the end, is where the value and merit in his tale lies.

Recommendation: Read it if you have a strong stomach for gritty dystopias, love a good mecha fight, sexy strong women, video games and late-blooming heroes. I’m giving this ambitious, memorable and flawed work four stars out of five, an approximation attempting to blend five stars for scope, theme, ambition and historical roots and good fast-paced page turning plot; four stars for having complex characters but maybe making them one notch too hard to care about early on and three stars for purple prose lapses.